Since the start of 2021, I have worked on the Fantuan food delivery company's courier service - a service that provides end-to-end, efficient delivery for customers.

Joining as a product manager, I was held responsible for developing the Route Planner Project.

Team of 10 Developers and 1 UI Designer

With many new orders on hand, how can drivers create more cost-effective delivery routes?

As the business grows, route planning will inevitably become too complex to manage using tools like Google Maps. The human mind is incapable of completely factoring in delivery time and pick up time, among other variants.

Couriers end up spending too much time managing delivery routes. Additionally, they run the risk of inflating their operational costs, often in the form of wasted fuel and wages due to the unnecessary routes.

Though we had an old version route planning on our app. But when I first kicked off this project, the old version of route planning was problematic, with usability issues and outdated features. At least two minutes are spent on planning a perfect route - time which couriers simply do not have. 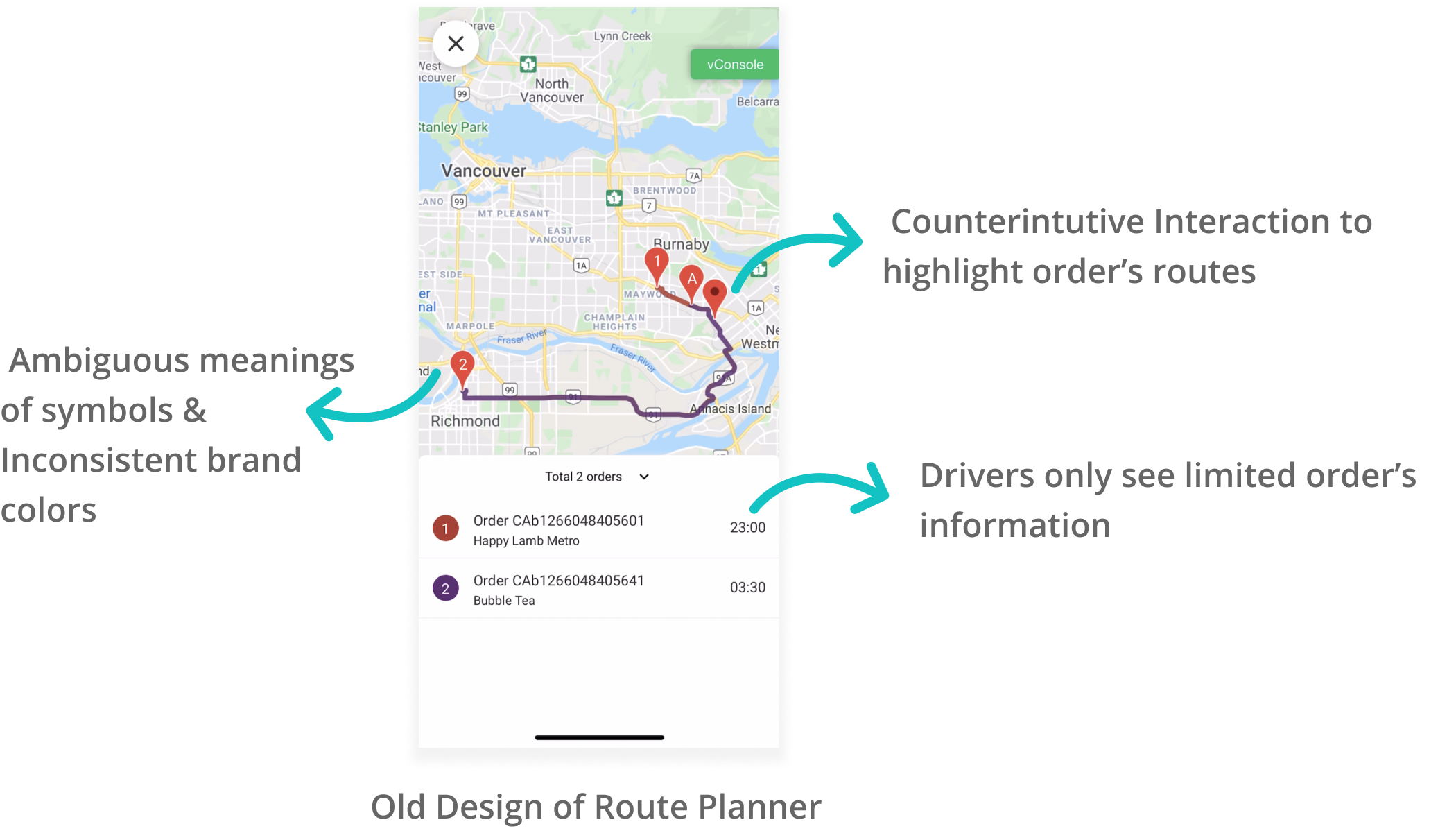 To further understand the user journey, I conducted interviews with several couriers. To fully experienced the functionality of the app, I also delivered food as a courier.

Old version was designed several years ago, it was really hard to use and the user interfaces were confusing. For specifically, they were forced to navigate between five pages and click on at least eight clicks just start the delivery process - all after accepting more than one order. This inefficiency resulted in wasted delivery time and delayed distribution.

Though the clickstream analysis, we also discovered that new couriers spent longer time than experienced couriers on the page view, though the former performed lower delivery efficiency than the latter. Unlike experienced couriers -- who possess hands-on delivery experience(familiar with restaurant processes such as waiting time, pick up time and location finding). New couriers were difficult to compute an optimal route in a short amount of time, largely because their lack of experience.

How Does The New Route Planning Works?

New version is a set of features that act as a digital experienced courier with Fantuan Courier’s existing app. Considering of intelligence is essential, I cooperated with our strategy team, which created a model that minimize drive time for multiple stops, while also accounting for a range of complexities like customer time windows, restaurant’s pick time and more.

I visualize the process of planning routes. Regardless of the number of orders received and accepted by a courier, the application will automatically optimize the best possible route. The courier will be able to access this new route calculated by the app, allowing them to see where they should deliver first. Also it provides certain integral features, including information about the stops and the ability to view order details with ease.

In addition, this modeling comes with a built-in navigation that deliveries occur as planned and the best possible route is chosen. By this, it ensures no time is wasted on switching between the third-party navigation app.

It includes two navigation modes - namely a mode to navigate to restaurants, and another to navigate to customers. Couriers can access in-app navigation on the homepage with ease, with the internal modeling recommending a first stop. 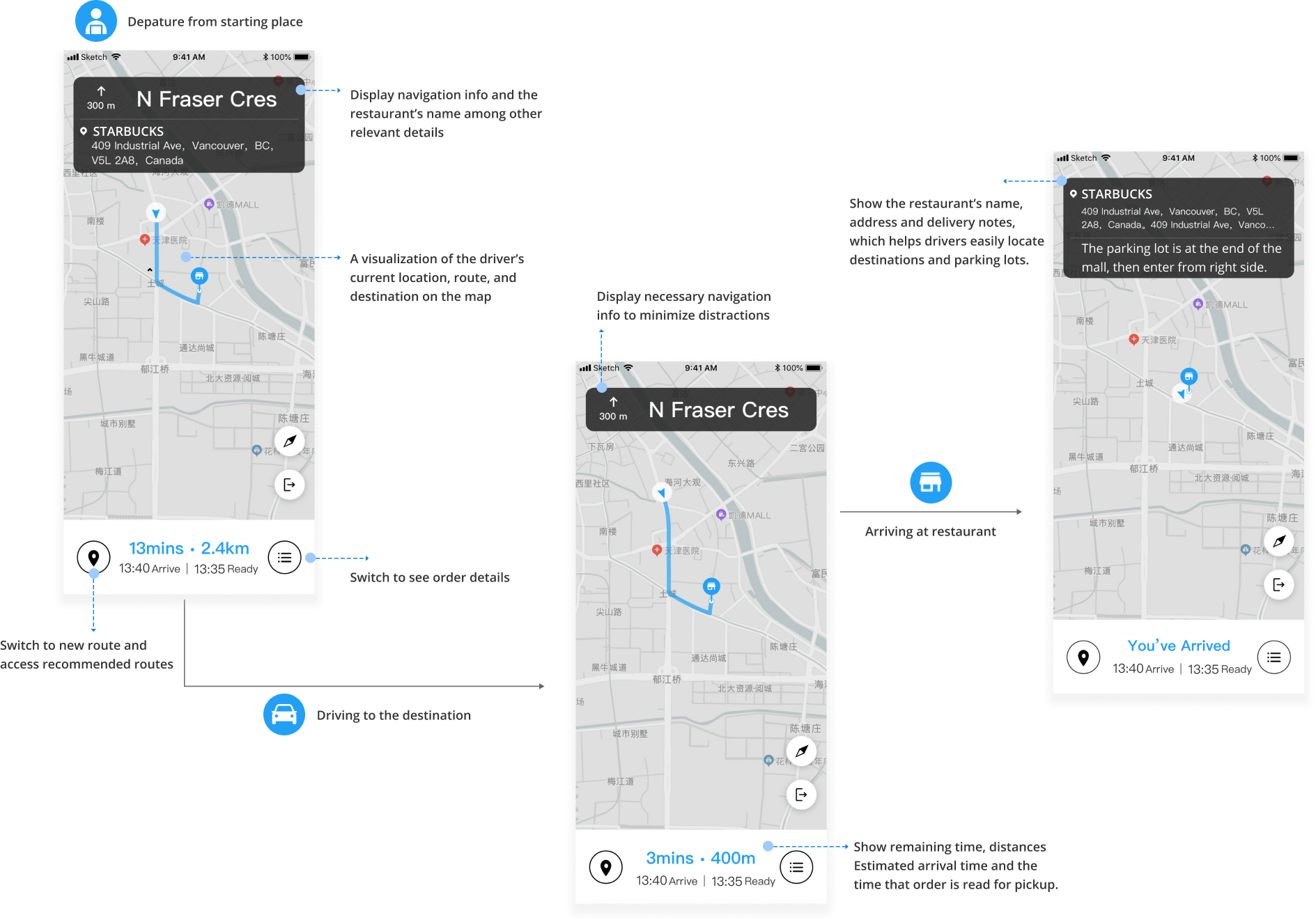 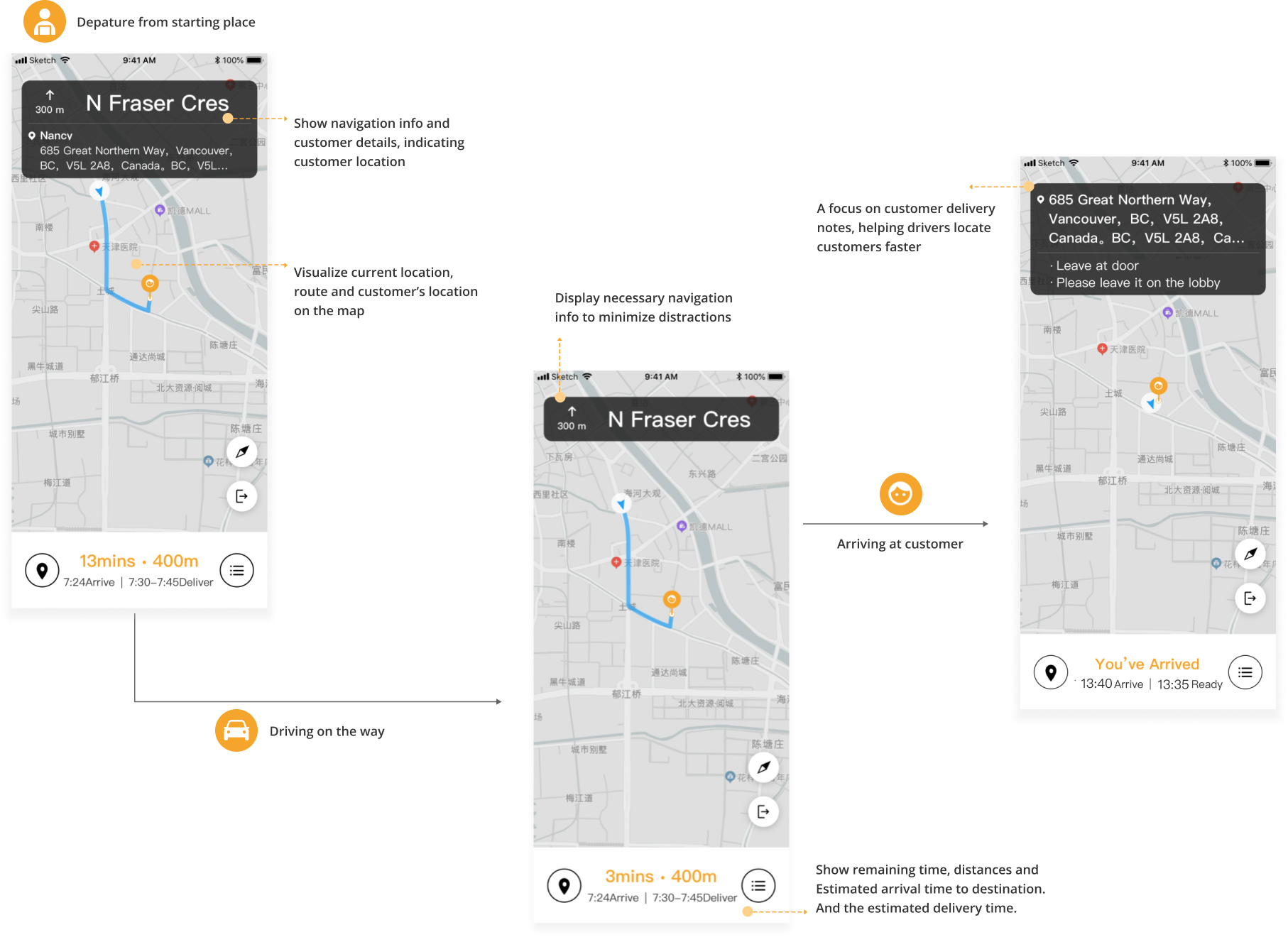 The new route planning and in-app navigation was officially implemented in August of 2021. Every driver in our app are able to use them. After three months of use, the results presented themselves. Our features have already drastically improved the efficiency of couriers, while also lowering the threshold to delivering multiple orders.

Next Steps & What I learned

Despite the success of the current model, there are still have several defects of the model that needs to be improved. Our team will continue to optimize the functions of the app.

Before this project, mostly I only focus on the typical user scenarios, but building a functional products with several ten thousand real users, I realized that edge cases are something that I should always keep in mind, these scenarios seldom happens but still will happen.  Also, I realized that using data to compare trends before and after the use of an application reveals details that comment never could.

Last but not least, tip more for drivers! Especially in rainy day, my experience as a food derivers really makes me know that deliver food is never a easy job, give these people the respect they deserve!